Buy Acer Spin 3 in Kenya from the US 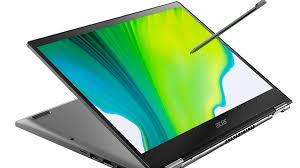 Acer is one of the renowned computer manufacturers with a large array of machines giving users all sorts of functionality options. In this gamut of PCs, you have the top-tier devices that go for upwards of a thousand dollars and entry-level options that cost a fraction of this. Of course, as the price goes lower users will have to compromise on some of the high-end specs.

Acer’s Spin 3 is one among those that will help you save some dollars while getting you more than just the basics. Acer Spin 3 is a laptop computer chockfull with specs that will pique your interest such as the Core i7 CPU and RAM space of 16GB. The Spin 3 is a 2-in-1 laptop whose software is built for robustness. Though the software packs a mean punch the same cannot be said of the exterior, which for the most part is made of plastic. Even so, users will enjoy the touchscreen display which is quite responsive. The speedy SSD and the powerful CPU also work to give the laptop computer a competitive edge even when pitted against higher models.

The Spin 3 released in 2019 in the first of its kind equipped with Core i7 capabilities. This, in addition to the 16GB of RAM, is also accompanied by a 512GB solid-state PCle SSD. In terms of the picture quality, the computer is fitted with Intel 620 UHD graphics on a 1920×1080 full-HD display. The 14-inch PC will cost you $799.99. However, you can also get the base model for $479 but with some of the premium accessories missing. For this price, you get the i3-8130U processor. The duo core processor is supported by a RAM size of 4GB with a 128GB solid-state drive. The cheaper model also comes with 620UHD graphics on a 1336×768 display.

The Spin 3 may have a plastic exterior but this is not to say that Acer failed at giving the laptop a stylish minimalistic look. The plastic casing comes in slate-gray and is glossy. The material is nice to touch though it is not as “grippy” as you would expect for a laptop computer meant to be used as a tablet.

The Spin 3 includes 360-degree hinges that let you rotate the keyboard behind the screen to transform the laptop into notebook mode. Angling the laptop at tent mode is no doubt going to be one of the most fun things you can do with the 360-degree hinge. It allows you to view your movies and read your e-books while accessing the screen’s touch features much more efficiently.

Upon opening the lid, the Spin 3 divides into two kinds of finishes. The bottom has a glossy, silver finish while the top part has matte black bezels. On the keyboard deck, you have the same type of glossy and smooth-textured plastic used for the exterior so you don’t have to worry about skin contact as it is comfortable even after extended periods of typing. You might be fooled into thinking that Spin 3 would lose its luster after a month or two of usage but this is not the case. We put it through rigorous tests that would expose the exterior to the rigors of everyday usage and it looked just as shinny. You don’t have to worry about unsightly marks on the lid should the laptop drop by accident. The Acer Spin 3 weighs 3.7 pounds making it significantly heavier than other laptop brands in its class. 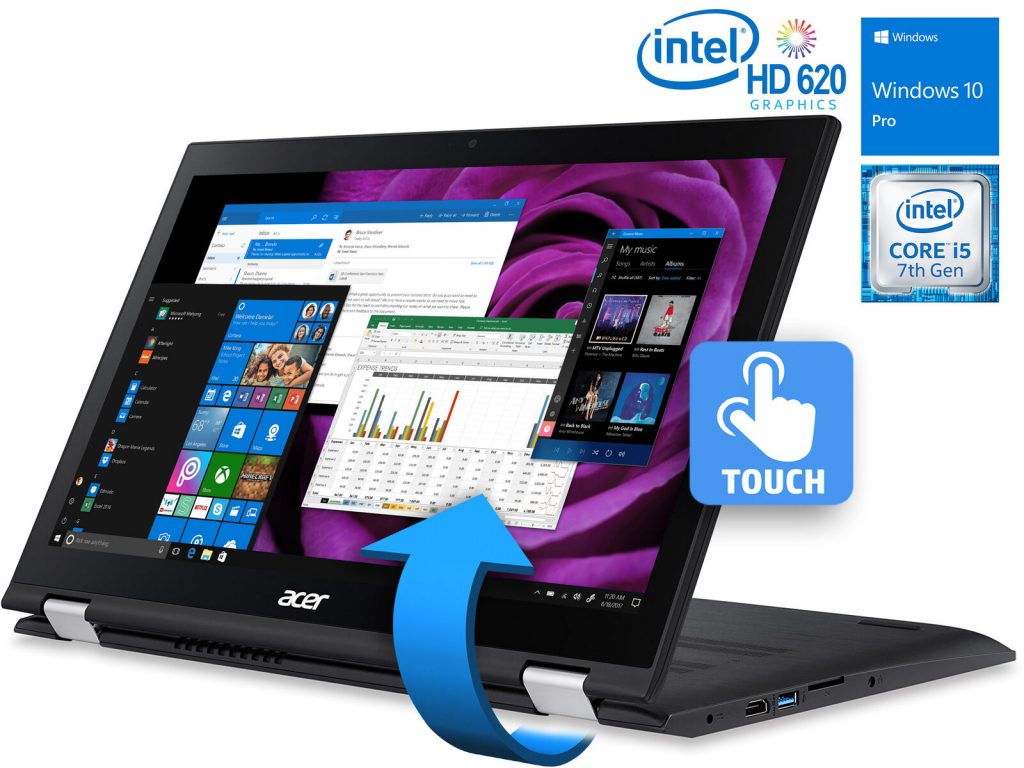 On the left side of the Spin 3, you have the SD card reader, USB 2.0 port, and a charging slot for the stylus. The power button and charging input are also placed on this side of the computer. The right side is fitted with a USB 3.0 port, a Kensington Lock Slot, a full-sized HDMI port, and the audio jack. It’s a bit disappointing that the Spin 3 does not include a USB-C port. Though relatively new, the USB-C port has quickly become a standard inclusion for all the mainstream brands out there.

Spin 3 has a 14-inch, touch display with 1920×1080 UHD resolution. The LED screen also doubles as a tablet thus touch-sensitive. The display also has IPS backlight technology. Acer thoughtfully put a narrow bezel 0.4 inches thick to make it as unobtrusive as possible when you are using the display as a tablet. With such a wide screen the Spin 3 is perfect for running programs and watching content at the same time.

Even though the screen is touted as ultra-HD the colors are not as impressive as you would expect. It is a little disappointing when watching movies with a lot of dark scenes or scenes with fast action because some of it is lost in the lackluster quality of color rendering.

When testing the screen using the sRGB gamut, the screen reproduced a measly 64% which does not come anywhere close to the 95% that is expected of high-end laptops in the same class like this one. Even with the disappointing performance, the PC’s display is still of decent quality and at 238 nits, this is one of the brightest displays you can find.

Typing with the Spin 3 is a cinch thanks to the island-style, keyboard which is also backlit. The keyboard is impressively responsive even though the key travel is 1.0 millimeters and actuation at 80 grams. The keys feel gentle to tap on so you can keep typing for hours on end without feeling the effect of it. The ease of typing will also enhance your number of words per minute significantly.

One of the first features that most users look out for upon opening their PC is the fingerprint scanner. The Acer Spin 3 has this as a black square at the top right end of the touchpad. The fingerprint reader syncs with your Windows Hello account so that all your content is kept together and secured. The fingerprint scanner is a forward-thinking piece of biometric security that is more effective in keeping your information safer. What’s more, there is no long sign-in process where you have to input a password.

Acer is synonymous with quality sound even if the laptop is not loud. The Spin 3 nails it in every sense of the word. The PC is fitted with a pair of front-facing, high-definition speakers. The audio is crispy clear with just enough bass and no distortion even when the volume was cranked up to the maximum. You can hear all layers of the beat and nothing is lost in the mix due to low-quality sound.

The Acer passes all performance tests giving impressive numbers. On the Geekbench performance test for overall output, the PC registered a score of 17,548 using the 4.1 test. With such outrageous scores, you never have to worry about overworking the Spin 3. The average score is placed at the 9,000s so Spin 3 performs exceptionally well compared to its peers.

When it comes to battery life, the Spin 3 is advertised as lasting up to 12 hours from a single charge. However, it unsurprisingly taps out after 7 hours at 150 nits of brightens. This in itself is not such a bad score considering the kind of performance you can expect.

Online shopping long became the norm, and you can now order from across the globe and have your items delivered to your doorstep. There are plenty of online merchants that offer such devices at lower prices than your typical brick and mortar stores. You can always take advantage of such online sales and get your gadgets shipped to your home country.

KENTEX CARGO is one of the leading shipping companies that offer such services to clients in Kenya and the rest of East Africa. Tech lovers can order all kinds of gadgets online where they come with cheaper price tags, and have them delivered to their doorstep in a week. KENTEX CARGO weekly air shipping is one of the shipping options that can get your bulk goods or parcels delivered to you in a matter of days. Enjoy the convenience of shopping on your phone and get the best deals on the internet for all types of goods.